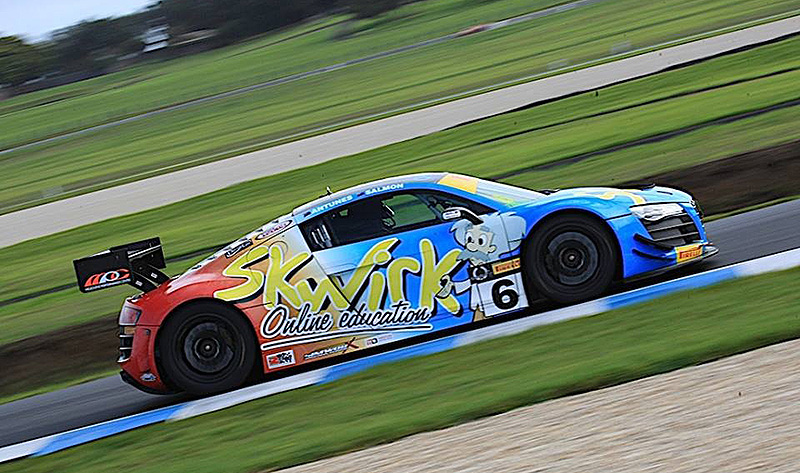 Round 2 of the Australian GT Championship headed to Phillip Island in Victoria and was a heavily anticipated 101 lap race in which a number of competitive cars team up with professional drivers to contest the endurance race. After a successful test day a fortnight ago the pairing of Rod Salmon and Nathan Antunes in the Skwirk.com.au V10 Audi R8 LMS GT3 was looking very strong and confident for the weekend ahead.

Friday official practice went very well. I finished up in 2nd position in a very wet 1st practice session, despite not having driven the car in the wet before. I absolutely love driving in the wet. It really separates the men from the boys so to speak and after the resurfacing of the circuit, there was surprisingly good amount of grip.

Rod jumped into the car and drove the next two practice sessions which were interrupted with intermittent rain that made it a little bit difficult to build confidence in the car and set a lap time. Rod finally had the opportunity to put some confidence inspiring laps down at the end of the day when the sun finally came through the clouds.

Saturday morning qualifying was again difficult with the weather. The drivers and the team waited until the last minute before deciding to go out with the wet tyres. With both drivers having to put a time down in the 25 minute qualifying session, Rod jumped into the car first and put a very respectable time down to place the Skwirk.com.au Audi in 4th position before handing the car over to me, in what was a fast driver change practice pit stop.

With the track now drying, it was a game of who would put the fastest time down right at the end on an almost dry track with everyone still on wet tyres. Early in my drive, I put the car on 2nd position, then waited to see how fast the track was drying, not wanting to go too much faster and get a big pit stop penalty for being in the front row of the starting grid.

The Boys were very happy with the result ending in 4th position on the grid. We were looking very strong for the long 101 lap race with plenty of speed in the bank.

The strategy for the race saw Rod jump into the car first under a rolling start. Lights went green and Rod surged ahead to hold position in front of some big horsepower cars and kept the fight up, until there was a safety car around the 25 lap mark.

There was serious confusion with the safety car, where Rod was supposed to be let through so that the safety car could pick up the leaders. The costly mistake resulted in our car going 2 laps down on the leaders.

Despite this very frustrating situation, Rod did an amazing job, punching out his fastest laps of the race to try and make up as much time as possible before handing the car over to me around lap 40. After a fast driver change and seamless pit stop by the MPC crew I was off to try and get those laps back.

I knew I had a big job to do and Rod gave me the car in perfect condition to do it. I was focused on doing a nice, fast and consistent pace and bringing the car back home in one piece. I managed to get the car up as high as 4th place outright. With some very fast consistent lap times we ended up with the 3rd fastest time in the race, up against faster and newer cars. But with another compulsory pit stop to complete, the Skwirk.com.au Audi finished a very strong 2nd in class and now leads the Australian GT Championships in it’s class.

After the race Rod said “It was great to work with Nathan Antunes at Phillip Island. He was on the pace from the first practice session and the Skwirk Audi R8 was always at the top end of the time sheets. Our pace overall should have given us the class win but a few things not going our way with safety cars meant that Nathan had to fight his way back from 15th to as high as 4th. Nathan’s talent was evident all weekend and we have now jumped to first in the series”.

I would like to thank Rod Salmon for this huge opportunity to drive alongside him. Thank you to Ric Kemp our engineer who made the car an absolute rocket ship and thanks to the whole MPC crew. I’m very much looking forward to the next round of the Australian GT championship in Townsville from 4 to 6 July.