It was a clean sweep for Rod Salmon and me in the Skwirk.com.au Audi R8 LMS GT3 last weekend of Friday 4 July 2014 for Round 3 of the Australian GT Championship at the Townsville Street Circuit. We got pole position in our class, finished first in race one, first in race two, and first in race three. A perfect race result for our team and our sponsors. 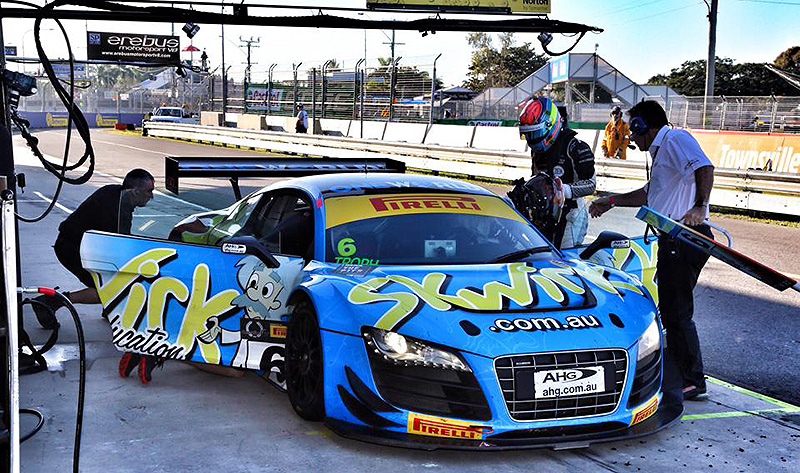 Round 3 of the Australian GT Championship in Townsville was a support category for the Australian V8 Supercar Championship. Neither Rod or I had raced on the Townsville Street Circuit before so we put in a lot of effort preparing for the race in the weeks leading up to the event and a few walking laps on the Thursday afternoon before practice on Friday morning.

Australian GT were the first category out on a very cold and dirty Townsville street circuit and I was in the car to set a lap time and retrieve some lap data ready for Rod to take over in practice two. Essentially we were out there sweeping and cleaning up the track whilst I was learning my way around the circuit for the first time. The car felt great to begin with and I ended the session in second position. Not bad for my first time around the circuit.

After some very minor set up changes to get the car working even better, Rod got in for the second practice session and learnt his way around very well posting a time that placed him 2nd in the GT Trophy class. The car was feeling great, we were working well together with our engineer Ric Kemp to get the car exactly how we wanted it and ready for qualifying in the afternoon.

Both Rod and I had to place a time down in qualifying which meant that in the twenty minute time period, which could have been hampered by red flag stoppages, we needed to get the lap time down quickly with as much track time as possible. I got into the car first and straight away we had a red flag stoppage due to a competitor car breakdown, this got my heart pumping in anticipation of not having enough time for us to complete a fast lap time. Thankfully the stoppage was very short and the pit lane was opened up ready for a lap dash. Now I only had time for three laps, so the first lap was all about warm up and finding clear track position, the second and third laps were about putting the perfect lap together. I was lucky to get three quarters of a clear lap on my first attempt. In my second lap heavy traffic slowed me down, forcing me to abort the lap and head into the pits for a driver change.

I waited to see if the lap I had completed was enough. And it was! I was 1st place in GT Trophy class and 6th position on the grid with a lap time of 1:14.05 which left us in a great spot for the start of race one on Saturday morning.

We had a great start with Rod holding position into turn one and controlling the pace for the first half of the race, all the way to our pit stop window opening where we were strategically waiting to see if there was a safety car. Fortunately for us there was and we were able to capitalise on the situation and do our pit stop driver change in this time which kept us in the lead. Unfortunately the cause of the safety car period was a result of two Audi’s, our teammates, colliding together and doing enough damage to rule them out of the weekend. Luckily no one was seriously hurt and the race continued. We finished the last few laps remaining without any dramas. I held on to our lead and for the first race win of the year for Rod and me and for the Skwirk.com.au Audi R8 LMS GT3!

We started race two from the same grid position, and this time I was in the car first. I had a great start and was able to gain a position on the track. With some traffic slowing me down over the first half of the race our competitors were closing in fast but we were able to get to our pit stop driver change without coming under too much pressure and still be in the lead of the race. Rod got in the car for the finishing stages of the race and put in a very solid effort to maintain our lead and bring the car home for another race win of the weekend! Two from two and the goal of a clean sweep in our minds, we had work to do back in the pits to make sure our chances of the clean sweep were strong for Sunday.

Race three on Sunday afternoon and a perfect weekend was in our reach. Rod was in the car for the start and again held great track position, gaining a spot after lap one and creating a good lead to the Trophy class cars behind. Our pit stop driver change at the half way point was our best to date. I jumped into the car to bring it home in the lead and give Rod, Ric and the crew from Melbourne Performance Centre the perfect weekend we’ve been working for.

This was the best race of the weekend for me, great passing and lap speed. I remember our engineer Ric telling me over the radio that the gap between me and the cars behind was getting bigger. “OK mate” said Ric, “we’ve done our job, the cars behind cannot catch you, bring her home, great job!” My first clean sweep of my professional career! Pole position and three wins from three races!

At the end of the weekend Rod Salmon couldn’t be happier, saying “Pole position and three wins, can’t get better than that!”

We are enjoying our success in the Australian GT Championships and very much looking forward to the next round at the Sydney Motorsport Park on 23 and 24 August 2014.