From qualifying fastest in Q2, to watching the car go up in flames during the ‘warm-up’ lap for the second 50-minute race, my GT Asia Series debut for the Dilango Racing Lamborghini team at the Autopolis circuit in Japan was full of promise and drama. 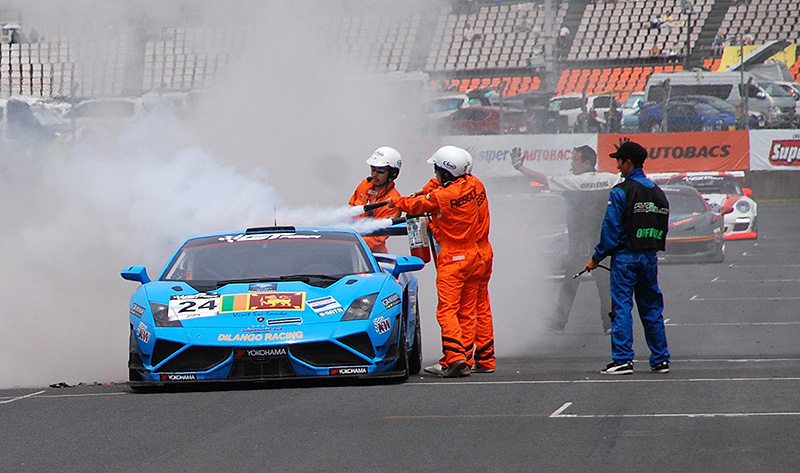 I don’t know where to start! From Thursday’s practice with the Gallardo FL2, to where we were in Q2 was a big step for the team and testament to the hard work they put in across the weekend. So to finish the event with two DNFs was devastating, but that’s motor racing.

My first race of the GT Asia Series on Saturday 31 May, saw Dilantha Malagamuwa settle into position 12 after keeping the Lamborgini out of trouble in the very busy start. I tried to claw back some ground in the field when I took over for the second half of the race. We were heading for a podium position, but I had to return to the pits with low oil pressure, and we were forced into retirement.

Unfortunately for the Dilango team, further investigation revealed a broken piston, and more likely internal damage, so the decision was made to change to the team’s spare engine for the next race for Round 4. The engine change on Saturday night after the failure in race one, put us to the rear of the GT3 field for the race on Sunday.

On Sunday morning, an exhausted Dilango team had effected the change and had the car ready for duty. Unfortunately though, all was not 100% right with the Gallardo FL2.

Coming to the grid I saw a bit of smoke, and flag marshals rushing towards my car with fire extinguishers, and then suddenly I could see the flames, so I got out of the car pretty quickly. I could see they were able to contain it, so I didn’t need to push the fire bomb and fill the car with suppressant, but I have to admit it got the heart-rate up there for a while.

It was not the way I wanted the weekend to finish up, but sometimes these things happen.

“Nathan did a fantastic job,” Dilantha said after the race. “I’m sorry for him and the team that we were unable to complete race two, but I think we learnt a lot this weekend, and I’m certainly very keen to have Nathan back in the car with me for the rest of the season.”

The 2014 GT Asia Series continues at the Fuji International Circuit in Japan on July 11-13. Stay tuned for an announcement about my involvement in the coming weeks.