Wow what a weekend! Round 6 of the Australian GT Championship at Highlands Motorsport Park and the Highlands 101 in New Zealand was always going to be an exciting weekend but I didn’t expect it to be such a highlight in my racing career.

We took both the Skwirk.com.au 2011 Audi R8 LMS GT3 which we’ve been racing in the Trophy Championship this year for the last two races of the championship on Saturday 8 November, and our brand new Skwirk / Beechwood 2014 Audi R8 LMS Ultra GT3 for the highly anticipated Highlands 101 lap mega race on Sunday 9th. 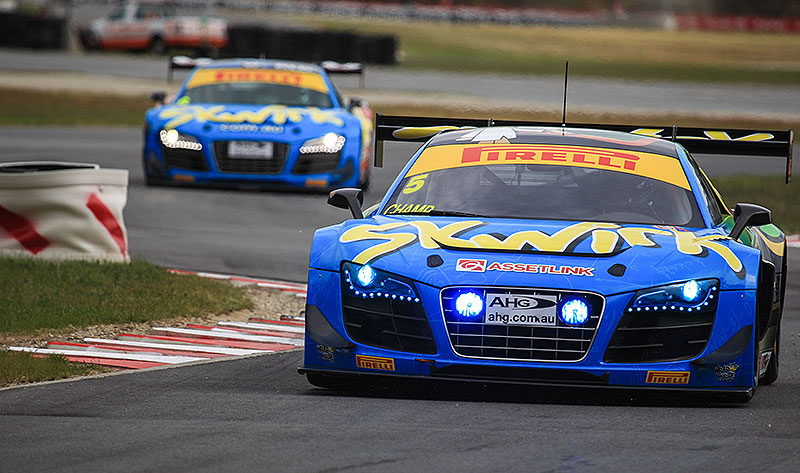 The weekend started out with preparation, Rod and I arrived at the circuit on Thursday morning for track walks and reconnaissance to get ready for the weekend. Rod had raced here very successfully last year clinching 3rd in the GT Championship and 2nd in the Highlands 101 in 2013, so I was learning a lot about the circuit from Rod’s experiences. The race track was absolutely amazing. Probably the busiest race track I have ever driven on, a real drivers’ circuit that would push our stamina and concentration to their limits. It had on camber, off camber, increasing and decreasing radius corners with a very challenging flow; this was going to be a great weekend!

Friday was practice and we had the car going perfectly. Our engineer Ric Kemp, Rod and I found a set up in the 2011 car which we felt was fast and knew it would be competitive in the two 40 minute races for the championship on the Saturday. I also had a drive in the new 2014 car to scrub in some brakes and make sure the engine and gearbox were feeling good. It felt really good and I was very excited to drive it on Sundays Highlands 101 race.

Saturday morning was time to qualify for the championship races. The track being busy in nature, we knew it was going to be difficult finding a clear lap. With so many cars on circuit. I got frustratingly held up on my fast lap but it was enough for pole position in Trophy and we secured a very valuable 10 points to go towards extending our lead in the championship.

Race one was very eventful. Rod started really strong and made it through the first chicane and right hand sweeping corner holding position, but on the first lap there was contact amongst a few cars and Rod got spun around and we had to re-join at the back of the field. Bad luck came our way again in the form of a drive through penalty when race control viewed the incident as Rod’s fault and we were handed a drive through penalty. Rod handed the car over to me in the pit stop to finish the race with a lot of work to do and wishing lady luck was on our side. There was a safety car a few laps into my drive when a car crashed and got stuck in the wall out the back part of the circuit. The driver was ok but due to its position and the difficulty removing the car the race was called short and stopped. We finished only a few spots away from last, not a good start to securing the championship, but there was still hope. 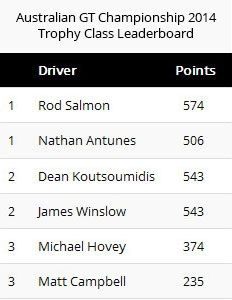 Race two was just as intense. I was way back in 26th position for the start but in some very impressive company and I was star struck! Craig Lowndes was directly in front of me in the Camaro GT3 and with his experience I had planned to stick right on his bumper and follow him through the field to the front and that worked out perfectly! After only four laps from the race going green I was in the lead of Trophy class, 7th outright and building a big lead so that I could hand the car to Rod in our pit stop for him to drive home for the win. But this wasn’t to be. I started to get warning lights for engine overheating so I had to slow right down and manage the temperature of the car and unfortunately this meant losing the lead. Rod jumped in the car and he had to do exactly the same thing. As Rod was finishing the race we calculated that we had to finish no lower than 5th position and with the car not capable of setting fast lap times this was a very nervous time.

The chequered flag was waved for the finish and we didn’t know what the results were due to a timing issue during the race so everyone was left walking around in anticipation of the results. 5th position was confirmed moments later and we had won the 2014 Australian GT Trophy Championship! We were all over the moon celebrating and shaking hands with the whole team and competitors. What a relief! All the hard work throughout the year had been rewarded in the best way possible.

When the hype died down we started to get our heads down again in preparation for Sundays 101 lap race in the new Skwirk / Beechwood 2014 Audi R8 LMS Ultra GT3. This meant we were now up against the championship class winning Mercedes Benz SLS AMG GT3 and the likes of the Aston Martin V12 Vantage GT3, Mclaren MP4-12C GT3 and the Lamborghini Gallardo FL2 GT3. These very fast cars were going to give us a very competitive challenge. Earlier in the weekend, I had set a new lap record in practice in our new car so we knew that we were going to take the fight to the big power cars. Ric, Rod and I made a few changes and were happy with what we came up with for qualifying and the big race. 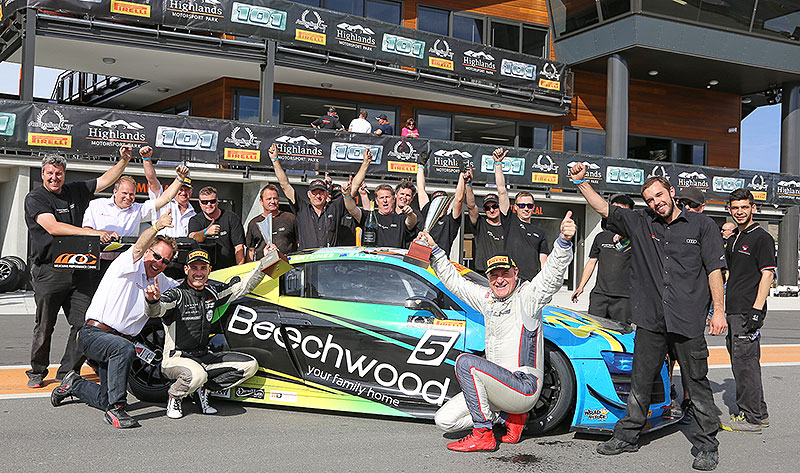 Into qualifying, both Rod and I had to drive and set a lap time. We had some work to do with brakes and tyres which meant it was going to be hard to set a fast lap time and we ended up 16th on the grid. It wasn’t where we would have liked to be and it wasn’t a true reflection of the cars potential, but we were still happy with the outcome. 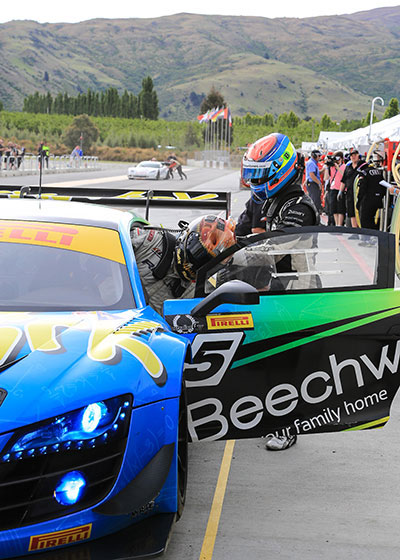 The start of the Highland 101 race was very different to your usual start. We were to start in Le Mans 24 Hour tradition where the driver would run to the car from their qualifying position, jump in and off they go racing. Because this was fairly dangerous, the Highlands 101 start was slightly modified and the co-driver was to run from a staggered start position and tag the back of their car in pit lane where the starting driver would be in the car ready to take off into the race. And to no surprise I was to do the sprint to the car and Rod was to be the starting driver. In the chaos off the sprinting start I managed to make huge gains and Rod was able to leave the pits in 3rd position, from 16th!

The race was on and Rods pace was outstanding! He held onto 3rd position all the way to a safety car period caused by a crash. We took this opportunity to do the first of the 2 compulsory pit stops. Because we had not reached the window where I could jump in and finish the final 55%, Rod stayed in the car and re-entered the race in 7th position but with many cars still to complete their first pit stop. As soon as I could get into the car Rod came into the pits and we did our final pit stop with a driver change, tyre change and refuel to get us to the finish line and I was off!

For 25 laps I was able to maintain 2nd position behind the more powerful Mercedes SLS, which had a huge lead thanks to a very fortunate safety car “free lap”. I pushed hard to maintain a fast pace and negotiate my way through lapped traffic.

Not so lucky when I saw the Aston Martin of Australian motor racing legend Garth Tander closing in right behind me. I was able to keep Garth behind me for a dozen laps or so but eventually the big power of the Aston helped Garth to motor past me and I dropped to 3rd. All I could do was try to keep up. We traded fastest laps right to the end of the race and were catching the Mercedes SLS at an average of 2 seconds a lap but his lead was just too big to reel in.

On the last lap of the race I received a call over my race intercom from my engineer. “Mate keep pushing hard the SLS is slowing down dramatically, there is something wrong with it and you might beat it to the line!” and boy did I push. As I rounded the last bend the SLS was stopped on the side of the track 100m from the finish line and completely out of fuel. We crossed the line in 2nd. What an amazing feeling it was after a hard fought 101 lap race.

The team was cheering and it was a great moment. Champagne was sprayed at the podium presentation and the year was finished on a huge high. We learned a lot about the new car which will help us get ready for the big Bathurst 12 Hour race in February next year.